It’s a twofer!  The VT Biz Expo ate the middle of my week so while the running was still right on target, I didn’t quite find time for the blogging.

I had two very different runs for my last days of week 8.  Both were 28 minutes but they took place in very different weather conditions.  Day two was full of fail.  It was Wednesday and the temperatures were predicted to be in the 90’s; this is Vermont, right?!  I decided to be smart and run before work so I’d avoid the mid-day heat.  Well, it was already in the mid-80’s by the time I headed out on the Mad River Path a little before 8am.  The humidity was incredible.  I had issues breathing deeply just during my pre-wamup-stretching.  The sun on the East side of the path was also full and HOT.  I expected the trees to shade me more, but there was no getting away from the unrelenting sun.  I was hot, I was covered in beads of humidity, and I hadn’t even started running yet!

I tried.  I swear I tried my hardest.  I kept telling myself I could do it, but around 20 minutes I started getting terrible side-stitches on top of the not being able to breath and being beaten down by the sun.  I continued to run in-between trying to relieve the cramp and at 25 minutes I made a b-line for the river and collapsed.  I guess I’m glad I made it to 25 minutes, but it’s the first run that I didn’t complete and I felt a little defeated.  I know I was only three minutes away from the goal, and some reading this might wonder why I didn’t just push myself a little harder, but I seriously pushed myself hard the whole time and that last three minutes would have been an eternity.  Ok…maybe I’m being a little dramatic there, but let’s just say I was DONE.  The river felt swell though. 😉

Day three was much more successful.  While it was still warm, the temps were in the mid to high 70’s with much less humidity so it was totally do-able.  I did the entire run on the West side of the Mad River Path and ended up on a part of the path I had never been to before.  I find it’s much easier to run if I’m running somewhere new.  I get distracted by looking around and exploring new places.  Once I’m back to part of the path that I’m familiar with it’s easier for me to find landmarks of “time” so I think to myself, “Ok, don’t get excited yet, you’re only to that bench and that means you have a loooong way to go.” or “This is the last bend in the path, only about three more minutes!”  Finding ways to take the focus off of the clock makes the runs more interesting for me and it seems less like exercise and more like brisk exploration.  I need to work on this since it’s much easier to fall into the routine of taking the same route every time.

The session ended with another luxurious swim in the Mad River.  Toby is getting used to my swimming with him now, but he was still surprised (and so was I) when I ran through the river and caught up with him, as he was taunting me with a freshly-caught stick.  I can’t believe my thighs are strong enough to actually run through the river current now.  It continues to be very exciting to see how my body is changing thanks to running! 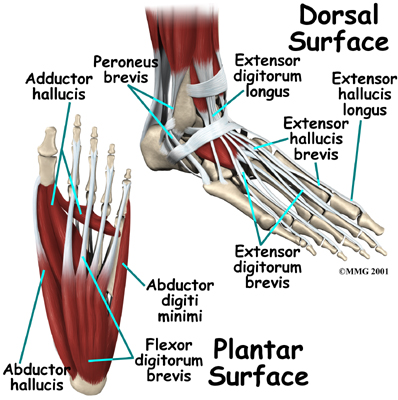 I do have one potential injury that I’m a little worried about.  Thursday, while I was at the Expo, I wore heels all day; this is something that I’m seriously not used to, especially since I’m about 6′ tall and really do not feel the need for heels often.  My feet were very smooshed all day and they (and my lower back) were bothering me that night.  When I ran on Friday, my gate was off.  I tried to correct it but I could tell I was landing differently on my left foot.  Sure enough, last night my left big toe was bothering me.  After some palpation, I found the source of the pain is coming from higher up, following the path of the adductor hallucis and bugging some nearby muscles and fascia.  I did some self-massage on the area (and whole foot) last night and iced it a bit.

Today, the area is still sore.  I’m not thrilled by this.  Foot pain can be serious if left alone and as a massage therapist, being off my feet means I can’t see clients.  Not to mention, as an active person being off my feet is just NOT OK.  My next run is planned for Monday, but I’m going to be RICEing my foot this weekend (so much for hiking today) and I’ll have to assess how it feels before the next run.  That said, next week is MY LAST WEEK!!!  I can’t believe it’s already been nine weeks.  I’m still looking for fun suggestions on how to continue with running without getting bored.  Please pass any ideas my way!